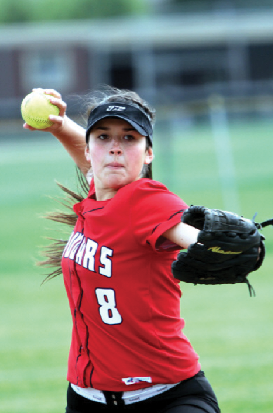 It was the first game of the season, each time SLV got up by a run, Carmel would score a run. The whole game was neck and neck.  It was the last inning, two outs,  a runner on first, and the score was six to four, SLV. They needed to get this out or Carmel would have the chance of scoring runs and ending up on top. It was a slow roller to the pitcher Ashley Welch, who threw it to Maddy Johnson who was ready at second base. Johnson then threw it to the first baseman Bella Castagna. They made a double play with an out at second and first, which was also the winning play.

The Varsity girls softball team have been doing a lot of conditioning over the winter to be ready for the season. Over winter they would do pre-season workouts in the weight room and have batting practices. This was to stay in shape for the season and come into it the best they can.

Five games into the season they have won four of them, they’re very happy and proud of that. They all worked hard over the offseason and so far in the season. They have a goal of winning games while having fun and they have accomplished that so far. They also are hoping to go to CCS, and even though it is early in the season if they stay on this track they might have a good chance of getting there.

Varsity coaches are Mark Brown, Jessica Carter, Charlie Hensley, and Michelle Hitt. They all have been involved with softball for a long time and Jessica actually played softball for the University of Michigan. The coaches give constructive criticism and new tips to help them. They can be tough on the girls sometimes but it’s just because they want to be the best they can and really push them.  They are grateful though for the coaches pushing them so hard. When asked about the coaches Hailey Lang says “All of our coaches are amazing and contribute in their own way due to their specialties in certain areas of the sport.”

The team is made up of a few seniors, a few freshman but mostly juniors and sophomores. The team has all ages, yet the chemistry is still great. Most of them have been playing with each other for a long time and it shows. When asked about the chemistry on the team Lauren Lozier said, “Oh it is great, we all get along really well and pick each other up when we notices others feeling stressed.”

For JV it is practically the same. It is mostly freshmen on the team with only two sophomores. Most of the girls have been playing together for a really long time so they work great together. Even for some of the people who haven’t been playing with each other as long, it got better through practices.

JV hasn’t had as many games as Varsity, but they are doing just as good. They have had two games so far and have won both of them. They  also have the winter workouts and batting practices. JV and Varsity usually practice together so they can all help each other.

JV coaches are Judy Wells, who has been participating in softball for a long time and Jenn Lang, who also played for the University of Michigan. The coaches are all about hard work and pushing yourself to the limits but also making sure you are enjoying the sport. All the girls love Jenn and Judy and think of them as amazing coaches. When asked about the coaches Jalie Edgemon said,“Our coaches lead by example, are dedicated and determined, teach teamwork, motivate and listen, build character, are committed to our team, and are our biggest fans.”

Both teams have been working very hard and are extremely excited for the games ahead. They hope to fulfill their goal of going to CCS as well.