On Friday, February 21st, ten senior guys competed in a pageant to earn the sash of Mr. SLVHS. This pageant was a humorous way to get to know these boys, while at the same time raising money for the senior class. The ten contestants were Kaleo Bachiller, Robbie D’Amato, Julian Espinoza, David Hester, Kjell Johnson, Adam Lopez, Max LaCapria, Adrian Miller, Tian Mirande, and Jordan Peabody. McKenna Maness and Gianna Meschi hosted the pageant and first started with an introduction to help get to know the guys, then preceded with interviews. During the interview, when the guys were asked, “If you could have anyone in the world come to your dinner party, who would it be?” it seems like everyone was in on the answer, and many of them said, “Max, because he’s the life of the party.” This was one of the many comical moments during the show. After the interview, all of the contestants came out in their swimwear, then showcased their special talent.
Each guy then had to show their special talent in front of the crowd: for Kaleo’s special talent, he sang a song about a mango on his ukelele, Julian also sang a song he wrote on his guitar, and David ate as many donuts as he could to the song “Eye of the Tiger”, Adam did stand-up comedy, Tian dribbled a soccer ball, and Kjell painted a picture on a canvas of Adam, Jordan belted to the song “I will Survive”, and Adrian told a stand-up story on how a store thought he stole eye liner, Max did a ribbon dance while in a pink tutu, and Robbie blew bubbles while wearing a cow onesie, and while the song, “Bubbly” played in the background. All the special talents were entertaining and unique in their own way, and was a great way to see everyone’s personality put into each talent. 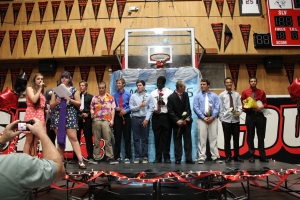 After these extraordinary moments, the guys came back out wearing their formal wear, then Mr. SLVHS was voted,and announced. Robbie swept the floor with votes and won, Mr. SLVHS. Robbie claimed, “It was pretty surprising when I won, I expected Max or Jordan to win. So it wasn’t really expected when they said my name”. Robbie also said behind the curtain, things were rushed and “surprisingly stressful”, but he said if he could, he might do it again. Robbie said, “My favorite part of the show was seeing everyone’s talent because it was embarrassing for everyone. The most embarrassing part of it for me was either between the swim suit and the talent, but probably the talent”. I questioned Robbie on his special talent and how he thought of it, and he responded, “I don’t really know. It just kind of happened. I knew it had to be ridiculous and pretty childish, and eventually I ended up with bubbles and wearing an animal onesie”.
Jordan’s “character” in the show was one we all didn’t expect. Jordan said he wanted to be, “overly boastful, really sarcastic, super over the top arrogant and self centered”. Jordan said he saw the 2013 senior guys do the pageant last year and it was really funny and that he had a good time watching all them embarrass themselves and he wanted to do the same thing for his senior year. I asked Jordan, “If you could, would you do the pageant again”, and he replied, “I probably wouldn’t do it again, I had a lot of fun, so I think it is best to quit while I’m ahead because I had such a great time”. Jordan continued and said, “My favorite part about the show is that I got to make people laugh, and it was really fun seeing everyone being creative with their special talents, like Adam’s stand-up comedy”.

One of the most remarkable moments in the pageant, was Max’s special talent, which Max said was one of the most embarrassing moments of the entire show. Max said, “Doing the ribbon dance was harder than it looked, I got really dizzy.” Max continued and said, “My favorite part about the show was when I finished the dance, and I saw Robbie win Mr. SLVHS”. Max stated, “If I could do it again I would have done it more jokingly and less serious, but overall I had a great time doing the show.”
Not only did the guys put on one great show, but the Mr. SLVHS show raised about nine-hundred and ten dollars for the 2014 senior class!